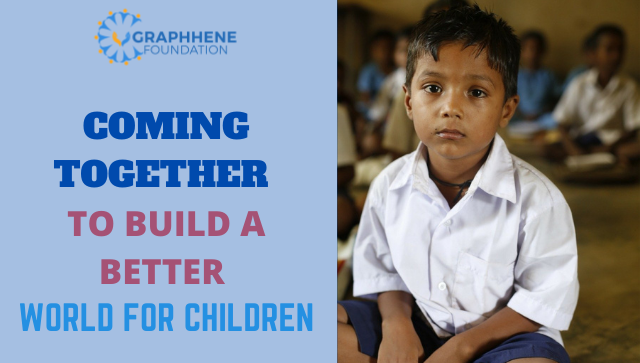 In the advent of modernization and digitalization education plays a vital role. Education is such a powerful weapon that dispels ignorance. Without education training of the human mind is incomplete.

Graphhene Foundation is one such NGO in Noida which is progressively working towards the betterment of poor children in India.

India is a developing country where a large chunk of the population is still uneducated. Our NGO in Noida sector 62 is taking a step forward to lend a helping hand to the poor children and help them build a better and safer future for themselves.

Graphhene Foundation is one of the largest NGO working for education in India. The major objective of our NGOs in Noida is to grant education to as many underprivileged children as possible.

Our NGO works for poor children is meticulously dedicated to providing a better future to the less fortunate ones. We have dedicated volunteers who try their level best to bring a positive change into society.

In the name of humanity, it is our responsibility to understand each other and help each other grow. Our NGOs in Noida are lending their helping hands to the poor children who sponsor education to children for a brighter future.

If you agree and want to help the poor get out of their misery, Graphhene Foundation welcomes you. We are considered a well known NGO working for poor children.

Children charity is considered to be the most popular charity worldwide. There are numerous types of charities for children comprising of:

Education is of utmost importance for every child’s vital growth. It is one of the crucial pillars which make them independent and self-reliant.

Graphhene Foundation is an NGO working for education near me that provides all basic necessities to the children and creates a safe space for children.

Due to the digital revolution, education is crucial for survival. Not every child is born with a golden spoon. The underprivileged children have the right to live a fulfilled life as much as we have.

Our NGO in Noida sector 62 has a major contribution in making the world a better place for children. Our motive is to spread education to as many children as possible.

We are considered as a reputed NGO in Noida because we do not believe in bookish knowledge; we emphasize inculcating life values within the children.